The theme of this month’s DTC in Focus newsletter is “From the Patient’s POV”, so I want to start with a little experiment. Si escribo esta frase en español, va a entender?

Did you understand that? The Spanish sentence simply says, “If I write this sentence in Spanish, will you understand?” I’ll admit that I used Google’s translate tool to help with the translation, and yes, I’m aware that online translations are not always 100% accurate.

Unless you are fluent in Spanish, those nine words probably confused you. Did you try to figure them out? Did you get close? For many of the 58 million Hispanics1 living in the United States, trying to translate isn’t just a nine-word experiment – it’s the everyday reality of living in a country where the majority of the health information is only available in a language different from the one they speak.

The fact that many pharmaceutical and healthcare brands continue to ignore the Hispanic market is remarkable when you consider the numbers. According to research from Telemundo:

When you see these numbers presented this way, it’s staggering to realize the opportunity that lies within the growing Hispanic population. But don’t forget that as a brand marketer, you have to at least meet these consumers halfway. According to The Curve Report by NBCUniversal, 77% of Hispanics feel underserved and wished brands reached out more (versus 43% of non-Hispanics), meaning that they are waiting to hear from you.

The truth is that every brand will say that multicultural education and marketing is important to them, but when it comes time for budget cuts, Spanish-language marketing is the first to go. However, armed with the statistics above, you can make the case for implementing these programs into your existing plan and begin delivering results by reaching the Hispanic consumer at the point of care. 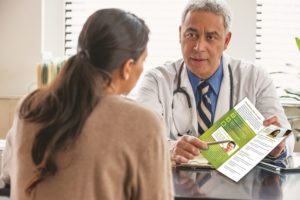 Even with the staggering statistics presented above, some brands are still reluctant to target the Hispanic consumer. It seems as if there are two prevailing myths that are clouding their judgments and a quick reality check might further reveal the tremendous opportunity with the Hispanic population.

REALITY: Over a third of Hispanics (35%) are much more loyal toward companies that show appreciation for their culture by advertising in Spanish.3 Many immigrants who came to the United States support brands that are available/marketed in their home country, while Hispanics who were raised in the United States tend to trust the brands that their parents and grandparents relied on while establishing the family’s new roots.

MYTH: Healthcare products are a “luxury” that Hispanics are not willing to purchase.

REALITY: 44% of Hispanics are willing to pay anything when it concerns health versus 36% of non-Hispanics, according to Simmons One View research. And, according to one PatientPoint study, 48% of Hispanic patients (compared to 37% of non-Hispanics) responded saying they go to the pharmacy immediately after – when the brand their physician recommended is still top of mind.

By ignoring popular misconceptions and relying on the facts, marketers can tap into an underserved market that is seeking Spanish-language education materials and from brands that understand the cultural nuances to healthcare communication.

Did you know that Hispanics suffer from more health issues than the general population? For example, Hispanic children are 40% more likely to die from asthma compared to Non-Hispanic whites, and Hispanic adults have the greatest prevalence of obesity and nearly 30% have diabetes. In one PatientPoint survey, a higher percentage of Hispanic women who participated – 32% – had never had a pap test compared to 6% of the Caucasian women and 4% of African American women.

These statistics underscore the desperate need for quality education customized for the Hispanic audience, including a more robust Spanish-language offering. At the rate the Hispanic population is growing, combined with the lack of healthcare education that has historically been available in Spanish, marketers will realize there is a tremendous opportunity to reach Hispanics now, and develop loyal customers for the future.

Linda Ruschau is the Chief Client Officer at PatientPoint, the trusted leader of patient and physician engagement solutions at the point of care. She brings nearly 25 years of experience in pharmaceutical marketing, point-of-care expertise, client service leadership and business acumen to the role. As one of its first employees, Ruschau helped PatientPoint pioneer the point-of-care industry in exam rooms, waiting rooms, clinical areas and throughout a patient’s hospital stay. She is now one of the company’s longest-tenured leaders. Ruschau can be reached by email at linda.ruschau@patientpoint.com or telephone at (513) 936-6819.

Ellen Falb-Newmark is the Vice President of Client Development at NBCU Hispanic Enterprises and as such serves as a personal consultant to clients on all things pertaining to the Hispanic consumer. With more than 25 years of Latino Marketing and Advertising experience, she utilizes consumer insights, research and custom data to demonstrate the value of this vibrant customer. Falb-Newmark represents all the company’s media assets including network, cable, digital, mobile, out-of-home, custom content and promotions. Falb-Newmark can be reached at ellen.falb-newmark@nbcuni.com or (212) 664-3503.

A Healthcare Art Director’s Journey: Becoming a Patient
DTC in Perspective: Time to Get Real on Side Effects